Every now and then I get the urge to start Adobe Acrobat when I’m using my Mac. I don’t like doing this, because Acrobat is a bit of a beast and I’ve had more failures with it than successes. It’s probably of my own doing, but I don’t seem to get on very well with the application.

Avoiding Acrobat is one thing, but there is a feature of it that comes in very handy, and that’s combining different PDF documents into one single document. Up until recently I have always had t use Acrobat, but today I bothered to look beyond. Today, I used ‘Automator’ that little app that sits in the Applications folder and seldom gets used.

It turns out that Automator has a built in library of actions which can really help in lots of ways. Running the app I noticed a set of tools for PDFs and right in there was one for combining multiple files. However, there is a catch… you have to understand Automator, and what it will do with your files. Sure enough, it’ll combine them, in seconds flat. But it then leaves them deep inside the system somewhere like ‘private/var/temp/gubbins/oddballs/cantfind/giveuplooking/someoneoughttomakethismoresimple/user/’

So you have to run more than one action, and this turns out to be easy, too. Ideally, you want to rename the file (as Automator will call it something very obscure), or even better, simply open it in the default application (erm… ‘Preview’, then).

From there, you can save it out as normal after checking that it really does look the way you need it to look.

The whole problem started for me when creating a proposal document that included a section laid out in Landscape mode in Word. When I went to print this (and save as a PDF) it created three files, one for each section (before, landscape and after). Maybe the print dialogue needs a box saying ‘this will create three documents. Do you want them combined?’ How easy it would then be!

However, Automator was painless enough. Here’s a shot of the right hand pane for you. Note that these three actions resulted in the file opening in Preview, and me having to save it manually from there. No biggie. No Acrobat, either 🙂 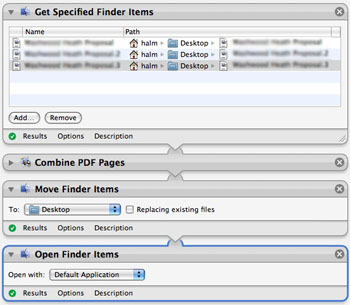