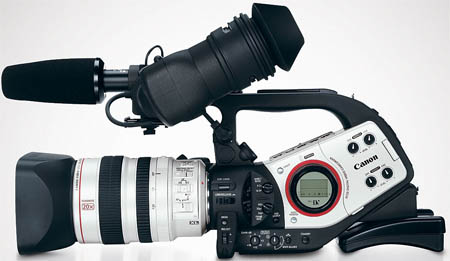 We have been very fortunate lately to be working with some excellent people. One such is Phil Sharp who works for Canon UK. Part of what we do is to undertake film and animation workshops around the UK, and occasionally get to do some filming for a wider project brief. Whilst at Ultralab we were fortunate indeed to have some pretty good kit to help us along the way, but at Cleveratom we have yet to purchase what we want/need. That’s where Phil comes in! He has arranged for us to have access to one and we have been using it on a project in the north of England.
Having a good camera like the XL2 for a few weeks (seemed like at least a month) really allowed us to get to grips with it’s capabilities. We were used to the ‘XL’ way of working, having had an XL1 previously. The XL2 has a much nicer interface and access to the common features is a lot more straight forward. Things like switching to 16:9 aspect ratio – on the XL1 this is buried deep in the menus… on the XL2 it’s a physical switch on the left hand side of the camera. The two XLR jacks on the back are a big improvement, as is the ability to switch easily into progressive scan mode.
So ok… it is not the newest of cameras, having largely been usurped by the HD trend. However, it is a great performing camera in the SD range, and I would buy one as soon as look at it. The lens is fabulous for the reportage style documentary work we have been engaged in, and whilst the camera is quite bulky, I like the solidity it offers.

Would I buy this over something like a Sony HVR Z1U? A tough call, since they are two different beasts, but I would definitely have one to hand if I could… and I’d have a sony as well 🙂