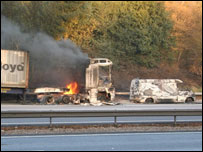 Were you on the M11 in Essex on 25th February 2006, travelling either north or south bound? Did you get on to the motorway easily enough, only to find a few miles later that it was gridlocked? Did you, like me, sit there for over five hours and wonder why Essex Police had allowed you on to the motorway in the first place? BBC news reported it as this, but it is a woefully inadequate description when you were part of it.

In the small hours of Saturday morning (25th Feb) there was a broken down lorry between junctions 7 and 6 (southbound). That’s between Harlow and the M25. A van came along to sort it out, but there was a fire (for whatever reason). The van happened to be carrying gas canisters and these are pretty dangerous when they get hot. As far as I can tell from radio reports, the breakdown happened at about 6am or so, and the fire was shortly after that. let’s say 7.30 for argument’s sake. Whatever the actual time, it was pretty early.

Essex police and fire brigade attended the incident, and the fire brigade, with all of their experience in these things, decided it was far too dangerous to allow any vehicles within 200yards of the fire. OK – no problem there.

However, at 10am when I joined the motorway heading south from Junction 8 there was no sign of anything wrong. No warning. No policeman, nothing. As I got on to the carriageway from the slip road a speed warning sign was showing ’40’ – this usually means there has been an accident and we should slow down. Three miles later and there was the back of the queue… at a complete standstill.

Today is my daughter’s birthday, and as a special treat we were taking her to see a show in London. She’s 9 and this was a big thing for her. The matinee starts at 2pm, and even at 10.10am I am thinking it is going to be OK… this is a minor problem and the police would not have let us on to the road if it was serious. The stretch between junction 8 and the next turn off is 12 miles – quite a long way, really.

A heck of a long way when it takes you over five hours to do the distance. Even longer when your daughter misses out on her special day, and even longer still when you lose ï¿½ï¿½200 of theatre tickets in the process.

So why did this happen?

At 7.30am the fire brigade informed the police that this was a major incident and no cars were to go past. What did the police do about that? They organised for cones to be placed on the M11 funnelling folk off the motorway at junction 7, and then did precisely nothing else. As a result, thousands of people joined at junction 8, or earlier, and were unaware of the delay ahead of them, with no chance of avoiding it. The police MUST have known the road was going to be closed, and yet did nothing to prevent people from joining at earlier junctions, or warning them of the delays before they got on to a stretch of road they couldn’t get off. All it needed was a patrol car at junction 8 stopping cars from joining, and another just before j8 giving cars a chance to use other routes to London or their own destinations. Instead, someone in the Police Force, with all their expensive training and years of experience thought it would be OK to allow folk on to the motorway and let them sit in a humungous queue.

And what do the police say about the problem? We heard from a radio reporter that they wanted to filter us off the motorway at Harlow (J7) but because cars were going along the hard shoulder they *couldn’t*.

That’s right – some selfish people driving along the hard shoulder prevented us all from getting off the motorway. Can you believe that? I certainly can’t. And even if it is true, what were the police doing about these blatant law breakers? Precisely nothing. And why were so many folk driving along the hard shoulder in the first place? Because the Police let them on to a road that was closed and they wanted to get off it as fast as they could. If they had been warned about the closure, perhaps they wouldn’t have got on the road in the first place.

Whichever way you look at it you and I (and anyone else caught in that mess) know it was lack of forethought or application of prior learning which caused me to miss my daughter’s birthday and lose ï¿½ï¿½200 of tickets.

But mine is a tiny part of the story.

We saw people arguing with the idiots driving along the hard shoulder, we saw children being carried away from their car and walking off to the next junction. We saw people young and old, male and female relieve themselves by the road side as time wore on – forced into indignity by the situation. We saw people leave their cars and return later with carrier bags full of provisions – some lucky folk had managed to get over the fences and walk into Harlow to shop at Tesco! We saw uncounted numbers of children bored to tears, parents at their wit’s end.

We heard on the radio how people missed their flights from Stansted, and how airlines were working hard to re-book the passengers, but worse was the story of a woman trying to get to Heathrow – she was emigrating today and had missed her flight. The airline said they wouldn’t re-book her ‘because they weren’t aware of there being adverse road conditions’. Right. Full marks to Czech airlines for that one.

So what else could the police have done?

Well before 11am (when folk were *still* allowed on to the road) they should have closed the junction. They should have also posted cars along the hard shoulder at various points (or at least posted officers) to stop the stupidity of people thinking they could jump the queue. They should (and could) have arranged for some of the central barriers to be unbolted and allow smaller vehicles through the gap to go back up to junction 8 and continue along alternative routes, reducing the number of people caught up in their mistake. They should have done the same for those folk stuck south of the M25 trying to head north, but at least those folk had the M25 to ‘escape’ to (not much of an escape route, I admit, but more chance of getting to your destination if you can at least leave the M11).

But no. We all had to go off at J7 and on to local roads there. All we could do is turn around and head back. When I got back to junction 8 I noted that (by 5.30pm) the police had at last shut off the road and were directing people on to the A120 and other local routes. Why did it take them nearly 12 hours to do this most basic of jobs? Who on earth thought it was still OK to get cars travelling along a stretch of motorway that was closed, for so long?

I mentioned prior learning. Remember 2003 when the snow fall kept folk in their cars overnight on the very same stretch, and the report from the highway agency recommending more ‘joined up thinking’? What was learned then about dealing with emergencies? So who is at fault here? No – it *isn’t* all those folk zipping along the hard shoulder – it’s the idiot who decided it was OK to let them on to the road in the first place, hours and hours after it was made clear the road would be closed.

So that is what I am paying my council tax for?

If you were in that mess today, what was the impact on you? Why not let everyone know here – leave a comment (keep it clean) and let’s send them to the highways agency and Essex Police. It’s about time someone took responsibility for these things, and became accountable for the very bad job they appear to be doing.

Edit – March 06 – click here for the response I received from the Highways Agency.