For the last ten years or more I have been working with Pete and Liz Conner to run an online site for youth rugby teams to make fixtures at short notice, when their normal ones have fallen through. The situation can be dire for some clubs – having a team eager to play, being let down by their opposition and deciding that soccer might be a better sport to play… some clubs never fully recover from the loss of their youth teams, since these are the life blood of the club and grow to be the next generation of adult players.

Hence the need for Fixex – a wonderful site for teams to use at a minimal cost. The fee is just £10 per season for the entire youth section in a club to make use of the service. For that you get unlimited access to the database of available fixtures, your own space to manage your fixtures and links to every other club in the exchange. It isn’t the only exchange in the country, but it is a good one.

Pete Conner died in 2005 and there was a real danger that the  exchange wouldn’t survive. The software was aging and needed updating, Liz was in a terrible state after her loss and I have to say I wasn’t much better! However, we persevered. I found out a bit about PHP coding and re-built the site, Liz found out about using email and took on the callers to the exchange. Between us we have managed to get by.

Each year all of the proceeds from running the system are donated to S.P.I.R.E (Support Paraplegics in Rugby Enterprise) – a charity that was established by the RFU. The donation is modest, usually around £250 to £300 pounds, but it is consistent. The presentation is made at Twickenham every January during the annual ‘extravaganza’ where clubs from all over the country are invited to meet up and sort fixtures for the coming season. Usually, this means clubs from the South East, mostly, although many come from much further afield. This year we donated another £300 and are pleased to have done so – a big ‘thank you’ is due to all of the clubs who subscribe and to Keith Norman who organises the event with the RFU. We are also hugely grateful to the RFU for hosting the event and providing food and drink for the evening… without the support of folk like Alan Black, this event could not take place in such prestigious surroundings.

And so the exchange continues. The web site is at http://www.fixex.com and a lot is happening over there. A new version of the software was released this weekend, and more development is underway. I couldn’t do any of it without the wonderful MX Kollection Dreamweaver plugins developed by Interakt (who have been bought by Adobe).

We are renaming the donation to be the ‘Peter Conner Award’ and are looking for other good causes to support as well as S.P.I.R.E – the intention is to find and help those who against all odds manage to find a way to achieve within rugby union. We will no doubt announce more about this as the year progresses. 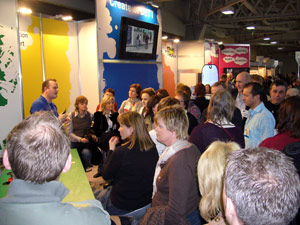 Of all the education shows held in the UK, BETT is probably the biggest by far. Each year, thousands of visitors head along to Olympia in London to wander around two halls packed with exhibitors showing off their wares. Traditionally, BETT is the place to go to see new and emerging innovations in software, hardware and general applications for schools. Meeting up with old friends and colleagues is another great reason, as are the many and varied keynote speeches that are made over the four day event. BETT 07 runs from Wednesday 10th January until Saturday 13th January.

Cleveratom will be working alongside the BBC and Apple computers to run the Create At BETT stand – a feature stand at the top of the stairs in the national hall. Create at BETT is the only stand that features children doing some really rather cool things with technology. Nothing is being sold, and only interesting conversation and information is being given away. This stand has been a focus for us for the last five years and now as Cleveratom we are delighted to be involved once more.

When you visit the stand you will be able to see children from King Harold School, Waltham Abbey, working with all kinds of kit and demonstrating digital video, animation, podcasting and explaining how these things might fit in to the curriculum. If you are a teacher then it may be the last thing you want – time with a group of children, but seldom will you get to talk to a group who are so able with technology and so pleased to be able to advise you on how it helps their learning. I urge you to come and strike up a conversation with them!

At the same time, you’ll be invited to use some of the tools, too! We will be running a number of different pieces of technology, including chroma key video to enable you to choose a piece of video and talk in front of it, then have it podcast like a mini lesson. The BBC have kindly found a number of short clips which we have put on to DVD and set up like a video jukebox (thanks to Alex Blanc for the help scripting the original version of this). You click a number of clips and they play back in the order you chose.

David Baugh and Chris Morley from Learning Central will be there too. An ‘Apple Distinguished Educator’ (ADE), David will be running some of the features on the stand as well as promoting the new Digital Cre8or award from the British Computer Society.

Today saw the official start of Cleveratom Limited, with the first meeting of the directors, Alex Blanc, Matt Eaves and myself.

Whilst we had a day long meeting to start to iron out the issues we face as a team, I can’t really start detailing what we talked about – so it seems a bit odd to blog the event… except of course it really needs marking as an event that took place!

What I can say is that we held it in a potential business start up unit which rivals many that we have seen and beats them hands down for cost. It may not be a permanent home, but it could be a good place to start from. We need to tread carefully and not spend lots of money that we just don’t have yet, although we have agreed that to meet and work face to face will be better than working from home and holding meetings in cyberspaces or in various coffee houses across Essex/Herts. That seems an odd kind of revelation from someone who has been a remote worker for five years now (although I travelled in to the office for the last two years every day)… surely we ought to be able to work remotely?

So, the (ad)venture starts!